EHCP Force Edition is a forked version of the original EHCP.  The original version can be downloaded and installed from www.ehcp.net.

The Force Edition slightly differs from the original version.  In fact, both the lead developer of the original EHCP release and  the  developer of Force Edition collaborate on updating EHCP and fixing bugs.  In this version, custom FTP accounts to a custom file path can be created.  Also, php chmod and FTP chmod should both work out-of-the-box since the Apache user has been changed.  The code is managed and maintained within SVN (it is not in the original EHCP).  As new versions of Ubuntu are released, the Force Edition is quickly updated to work with the latest versions of packaged software within the main repositories. 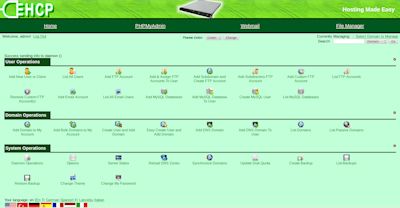 The EHCP control panel comes with many graphical themes that users of the control panel can switch between and use.  The Force Edition’s default theme is picante, created and easily maintained.